How the Rising Generation Will Revolutionize, then Conflate Philanthropy 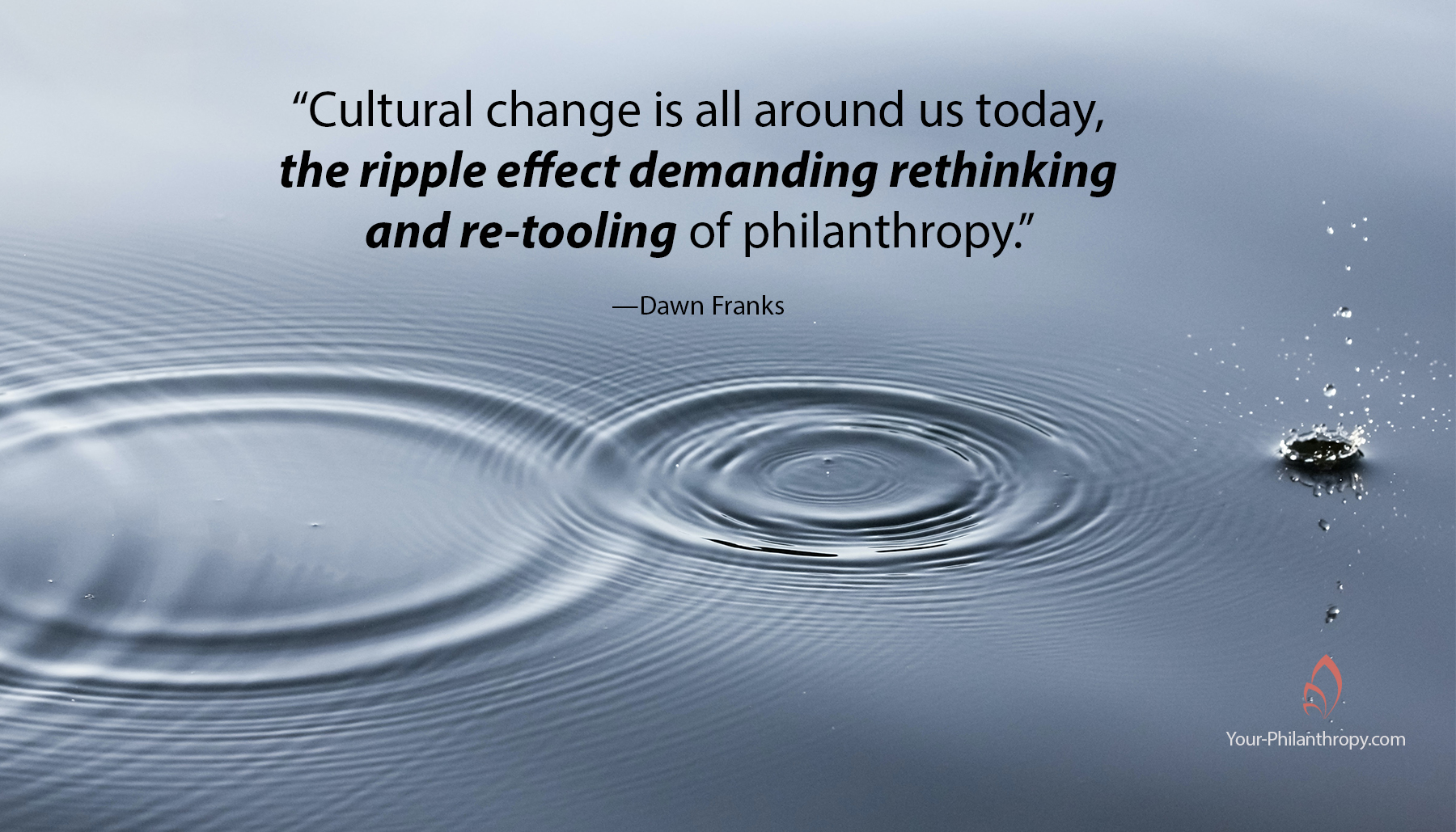 A few years ago, we called them the Next Generation. Now, they are the Rising Generation. They are no longer simply waiting their turn; they are rising to the occasion, and it is changing philanthropy. It is a revolution of sorts with a bullet blender effect.

The first question is what kind of revolution? Is it the revolution of turning around from the Latin word revolvere -to revolve – suggesting turning back, or reflecting upon – a predictable return to the original position? Or is it a revolution – a revolt – as in the French version, the overthrow of a political system?

It is mainly unexplainable how the word gained two different definitions around the same period in the Middle Ages. For us, the dominant definition is “overthrow.”

We’re not strangers to revolutions – justice, freedom, or equality – worldwide and in America.

Several years ago, I wrote about the revolution occurring as a rising generation of philanthropists was coming of age.  Concerns about how the rising generation would differ from their grandparents were often debated in the first two decades of the twenty-first century.

Research by Sharna Goldseker and Michael Moody eased our fears with encouraging statistics. Eighty-nine percent of the rising or next gens interviewed said their parents influenced them. In comparison, Sixty-nine percent said the same for their grandparents. Their insightful book Generation Impact: How Next Gen Donors are Revolutionizing Giving brought comfort even as it underscored the rising generation would bring change to philanthropy.

Cultural change is all around us today, the ripple effect demanding rethinking and re-tooling of philanthropy. It impacts philanthropy far beyond what we talked about then.

Goldseker and Moody suggest the rising generation is “earnestly and eagerly searching for ways to honor their elders’ legacies and adapt their giving to have maximum impact.” They tell us younger donors are rethinking how to give. They are revolutionaries with a bullet blender quickly conflating philanthropy in search of meaning and impact.

Willing to disrupt traditional philanthropy, they focus on results. They are more likely to listen, trust and cultivate ongoing relationships with nonprofit organizations than their grandparents and parents. They will dive head-first into the diversity, equity and inclusion issues bubbling everywhere. They will experiment with vehicles such as LLCs, (C)-(4)s, and policy work to search for change.

Finally, the authors tell us that while the rising generation respects their parent’s and grandparent’s values, they are eager to change whatever needs to change. Goldseker and Moody describe it as change “even if it makes other donors, nonprofits, and or anyone else uncomfortable – if doing so will help move the needle in a significant way on the problems philanthropy is trying to address.”

The Rising Generation has taken a page from Adam Grant’s new book, Think-Again, where rethinking rises to an art form. Grant goes so far as to encourage us to unlearn, to dig deep and open ourselves to the discomfort of doubt.

We are in the throes of what Grant calls Collective Re-thinking. Of course, revolutionary thinking isn’t new; we’ve been down similar roads before. Or maybe that was our parents and grandparents who struggled with the sixty’s revolution.  Our revolution focuses on diversity, equity and inclusion across all institutions. What we need now are what Grant calls “nuanced conversations.”

In the end, it is still all about serving better. It requires us to go deeper and ask uncomfortable questions. It demands that we listen all around us, inquire about other opinions and dance with disagreement. That’s where the Rising Generation is heading. We need to get on board.

What are you learning from the rising generation?