Donations Instead of Flowers Keep Memories and Nonprofits Alive 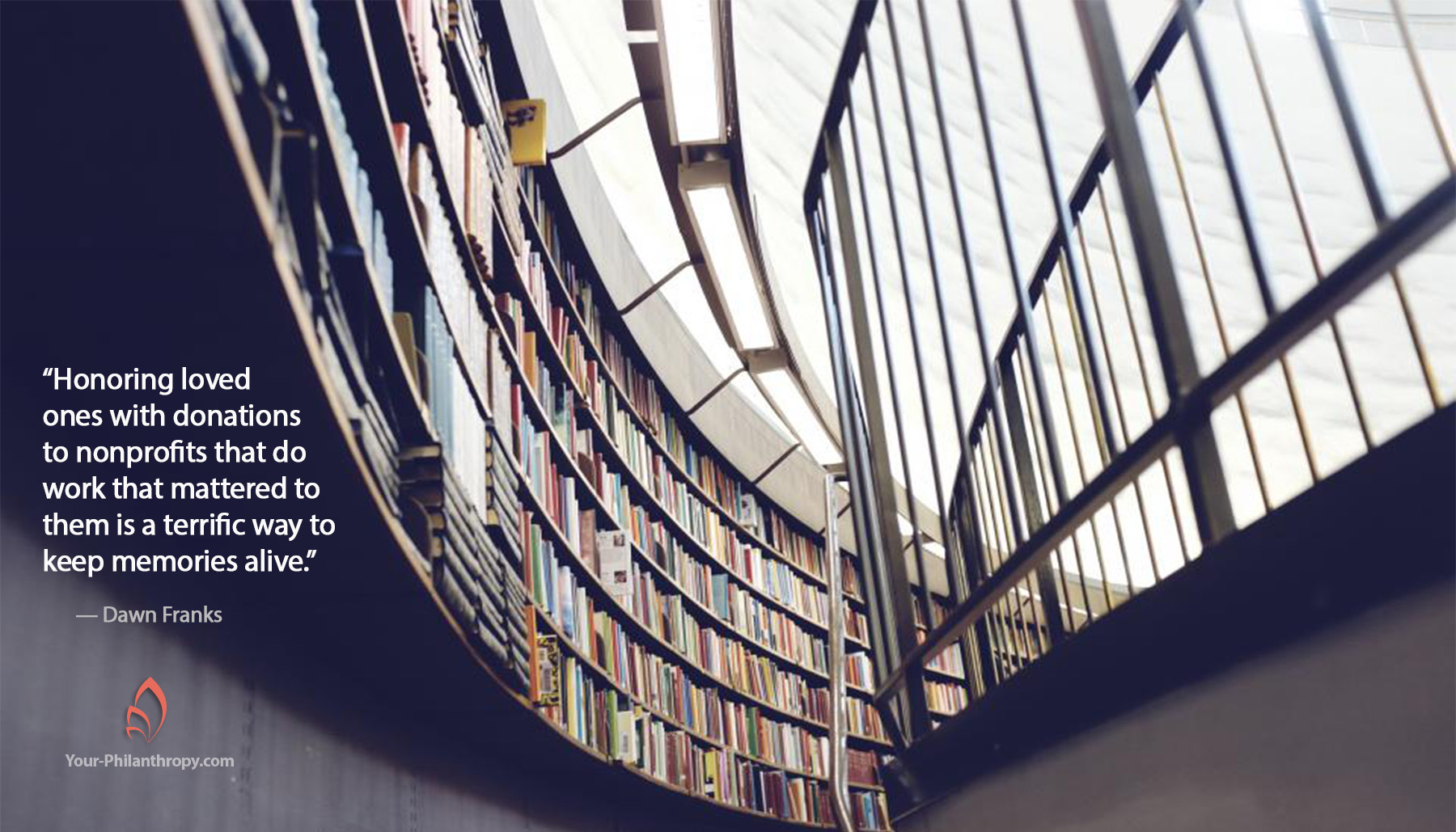 It didn’t start out as a month of remembrances, but it is. I enjoyed reflecting on memories from childhood with Grandparent’s Day early in September. But then not quite unexpectedly my mother passed away. Despite how prepared you think you will be the place and time of death still comes as a surprise.

Memories piled on top of each other like a tall mountain, one I preferred to climb slowly, However, writing her obituary started me upward as I sought the essence of my mother.

I knew that I wanted to encourage donations instead of flowers, but I didn’t have any idea where to start in sorting through a list of great organizations I know well. I put off the decision and just started writing about the details every ending story captures. When she died, where she was born, where she lived, what she accomplished, and the list of survivors.

I found the answer in her story. Her “giving fingerprints” were all over books, education, genealogy.

She loved books, reading big ones when my brother and I were kids. During the last years of her life, she read two newspapers every day. Several times she commented that the greatest personal loss she could experience would be the loss of vision.

While still in elementary school I inquired how old I would need to be before I could get married. Mother had a quick response, “after you graduate from college.” Her own education was interrupted by life. But at the age of seventy, she completed a college degree, sending a clear message that it is never too late.

While studying for her degree, she worked part-time at the college library and a local GED program. So, there it was again, a love of books and the belief that education mattered.

One of the mountains I will be climbing for some time will be the boxes of memories that have followed her all over the world. Going through them with her in the last few years unearthed newspapers with headlines of wars starting and ending, astronauts in space and a moon landing. There were pictures of a great aunt who starred in silent films and a shoe box of deeds for property no longer owned and pictures upon pictures. Many only faces with names that had slipped away.

In her later years, she became involved with genealogical research, joining a local genealogical society. Sometimes she did mini-research for others resulting in a drawer full of history on not only our family but others as well.

As I wrote the short version of her life, I discovered where I wanted to suggest donations in her memory. Her last months of life included the care of many wonderful folks from hospice, and so the list became the Hospice of East Texas, Literacy Council of Tyler, and East Texas Genealogical Society.

That’s her story, but there are many ways to approach such honors. I watched a family who had received an inheritance decide to set part of grandmother’s money aside for the third generation to make a gift. Mom and Dad asked the third generation to work together and come up with an organization to receive a memorial gift in her name.

Three siblings and an in-law each discussed their values and interests. They identified the areas that overlapped and then looked around to pick just the right organization. Once the organization was identified, Mom and Dad sat back and pronounced the choice perfect.  Grandmother had cared very much about that organization. Their gift was a testimony to the many seeds she planted as they witnessed her volunteer example.

Honoring loved ones with donations to nonprofits that do work that mattered to them is a terrific way to keep memories alive. Still with us or not, it sends the message that what they believe lives on in us.

Nonprofit organizations are supported every year by the variety of donations that come to them. For us, as donors, there is no more fitting way to give by remembering loved ones or to honor those still with us than to give in their name.

Where would you give to honor someone special? Write that check today.