Why Does Nonprofit Duplication Exist? 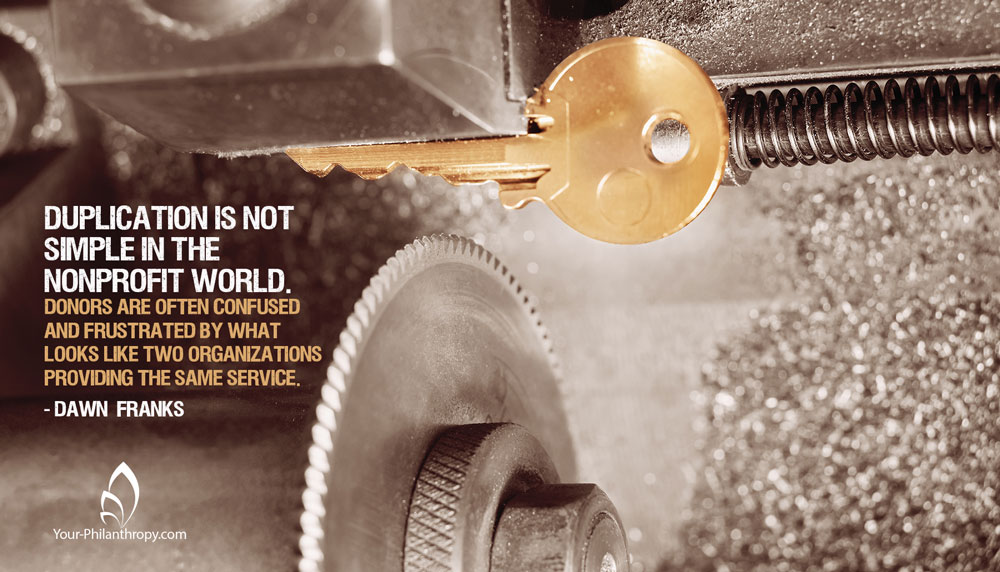 He was sitting across from me at the conference table. Excitedly describing the idea he had for a new nonprofit there was hardly time for a breath between sentences.  Not wanting to pour cold water on his idea I sat back and listened.

Finally, there was a pause, and I asked a tough question. Have you talked with any existing nonprofit organizations to find out if anyone else is doing what you’re describing or some version of it?

His expression changed, and the enthusiasm dropped.  The answer was no.

Shifting gears he suggested it didn’t matter because the client population and geographic area would be different. No need for research, he was sure of his idea.

I’ve had many of these conversations. Sometimes I try to explain that what I’m hearing sounds like a duplication of service and try to make helpful suggestions, often to no avail.

In the world of science, duplication has a very specific meaning. It means that one thing is exactly like something else. It is copied.

[easy-tweet tweet=”Duplication is not simple in the nonprofit world. Donors are often confused and frustrated by what looks like two organizations providing the same service.” user=”DawnFranks2″ hashtags=”#NonprofitDuplication” template=”qlite”]

Nonprofit organizations are often frustrated with each other when services and missions seem the same on the surface.  Although frustrated they are not confused.

Ask any nonprofit organization to explain how their services are different from what another organization is doing and they will have an answer. Maybe the service is the same, but the target audience is different. Perhaps one serves families and the other only children. Or maybe the name sounds similar, but the services are totally different.

When we encounter what looks like duplication it is our job as donors to learn more. An informed donor is always a smarter donor.

But what if duplication exists?  Is it really bad? The answer is not simple. It is two sides of the same coin.

Some donors view duplication of any kind as waste related to multiple administrative and overhead costs. Pressure on the community to meet the fundraising needs of multiple organizations providing the same services can create frustrated donors. The result is too many letters in donor mailboxes or fundraising events to attend.

On the other side of the coin, the need may be so great that one organization alone cannot begin to serve everyone. The adage location, location, location rings true here just as in real estate and restaurants. Services right where the need exists matters to those in need of the service.

Helen Gahagan, one of the first women to serve as a U. S. Representative in 1944, described duplication as inevitable.  “In trying to make something new, half the undertaking lies in discovering whether it can be done. When it is clear it can, duplication is inevitable.”

It is still the work of a donor to be informed. It is still our work to make a decision based on what we’ve learned about where to invest our resources. A donation to a nonprofit organization is a gamble on the leadership – the executive director and the board of directors. So, don’t let possible duplication stop your donation until after you’ve done your research.

Are you trying to weigh two organizations about a significant gift? Give me a call and let’s talk about it.