Look, Listen and Learn for Better Giving This Year! 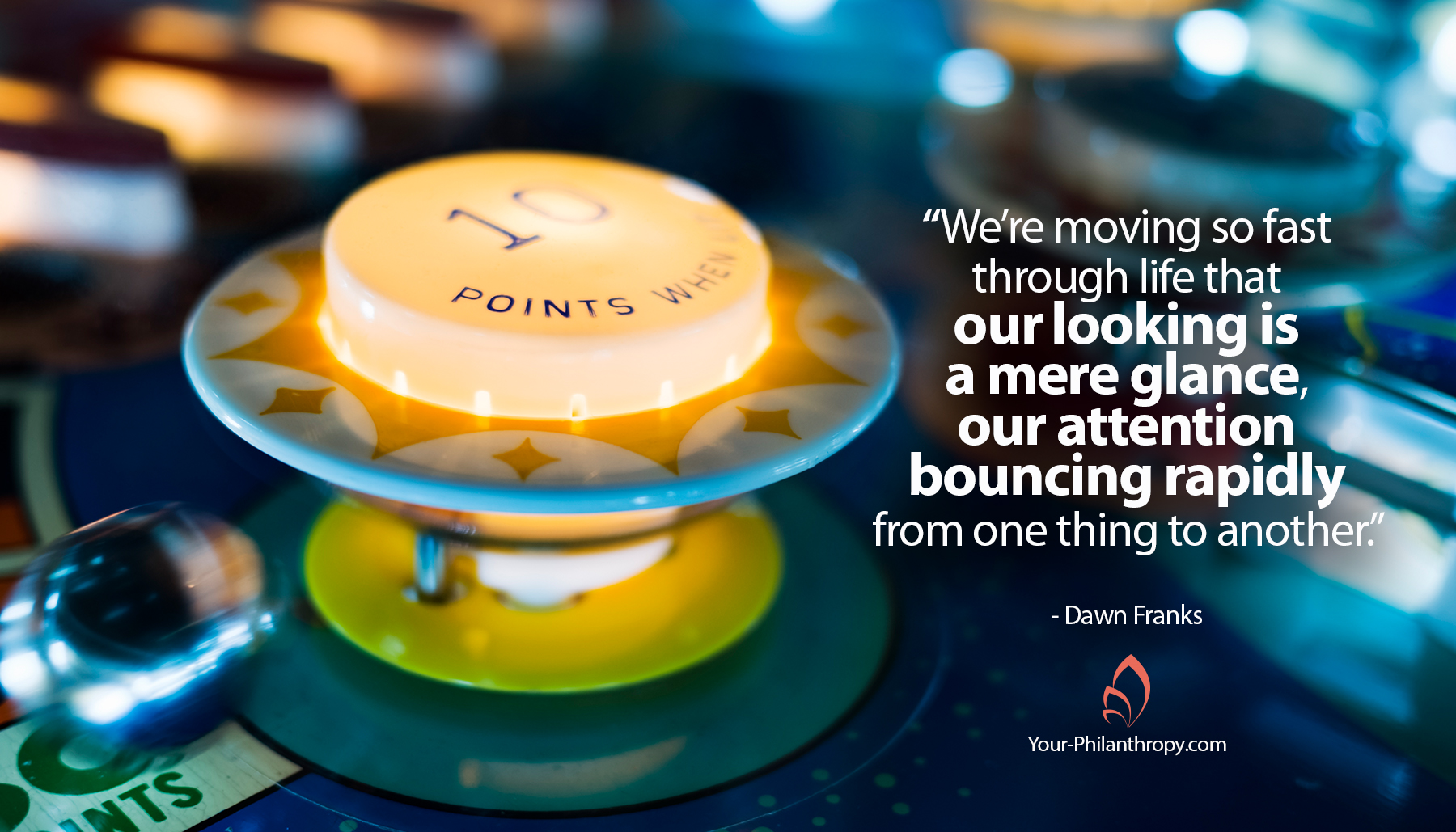 I don’t remember this for a fact, but I have it on good authority from author Robert Fulghum that the first word I learned from the Dick and Jane books of my first class reading circle was LOOK. It’s a very simple four letter word but has layers of meaning.

To look at something is to direct our attention toward a person or thing in a very particular way. To look is intentional and purposeful. At least that’s what it should be. Quite often though we’re moving so fast through life that our looking is a mere glance, our attention bouncing rapidly from one thing to another.

Sometimes we need to slow the looking down so the little shiny ball will land in the hole and rack up a few points in the pinball game of life. Admittedly, you’ve got to be of certain age to even know about scoring points on an old-fashioned pinball machine.

Short tutorial: drop your money in the slot, little shiny balls line up in the tray, pull the lever and watch a ball zoom into the point-making territory full of holes where points rack up. Keep your fingers on the flipper triggers to catch the ball and flip it up toward the holes with higher points.

If the ball bounces into the hole – points rack up, if it just glances off the hole – no points. Nothing gained, nothing earned. For those of that certain age that recognize this quarter burning, highly competitive game we know, the younger generation with their controllers, joysticks, and video games have nothing on us.

Whether a pinball game of Flash Gordon or The Who’s Tommy: Pinball Wizard or the video games of A League of Legends or Minecraft the ability to be very focused on the game is what counts. Young or old you’ve got to look intently or the score just doesn’t happen.

To score well as a donor look at where you send your donations. The nonprofits and causes you supported last year certainly hope that you are looking their way. That’s why they send newsletters and invitations to events and occasional updates about something important they are doing.

A local organization serving East Texans living with dementia, Alzheimer’s Alliance of Smith County caught my attention today when their newsletter arrived. It had a new look. I took the time to read it. I read the new Executive Director’s message; I studied the infographic that told the story of their services in numbers and looked through a list of board members. In short, I stopped to really look.

As a long-time supporter of the organization through two previous executive directors, I am very familiar with them, but a change in leadership means I need to pay more attention to be sure my donations are not just useful to them but accomplishes my expectations.

I also intend to pay attention in another way. I want to know what others are saying about the change. I’m not alone in my support of their good work. That reminds me of another one of Fulghum’s quotes from his list of sixteen items he famously described in the book “All I Really Needed to Know I Learned in Kindergarten.”

I especially like number thirteen on the list. “When you go out into the world, watch out for traffic, hold hands and stick together.”

Donors generally do a poor job of learning from each other about giving. Giving gets better when we watch for danger like change at our favorite nonprofit, share what we’re learning and stick together.

I hope you feel good about your giving in 2016 and that you will make it a point to look, listen and learn so that your giving is even better in 2017. Rack up those points – we’ll all be better for it.