How Your Role Models Make You a Greater Philanthropist 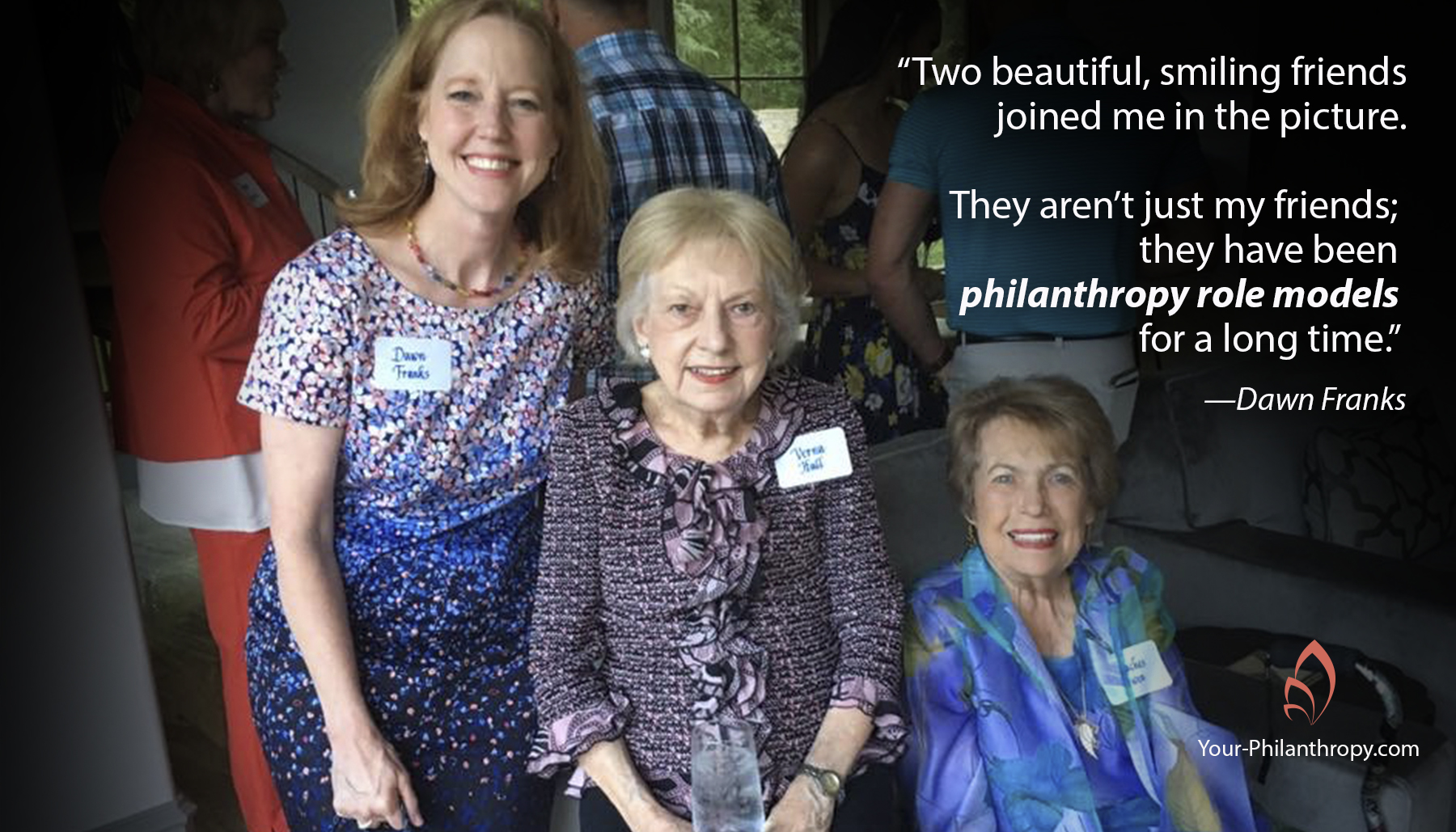 The email was short and said, “If you don’t have this, I wanted to send it to you.”  Thirty-plus years of memories raced through my mind when I saw the attached picture. It’s a collection of memories that have not faded with time and are relevant to the work I do every day.

Two beautiful, smiling friends joined me in the picture. They aren’t just my friends; they have been philanthropy role models for a long time. One recently passed away at 82, and the other is still kicking at a young late eighty-something. Peaches Owen and Verna Hall have both been a part of my nonprofit career for more than thirty years.

They have become role models of great philanthropy with their money, time, and wisdom. Role models are very different from trusted advisors who agree to be your mentor. That’s a mutually agreed upon relationship.

Your role models need only be someone you watch from afar, interact with occasionally or when we’re lucky, enjoy the gift of time spent close.

For me, role models are even more important than mentors. I’ve certainly had different individuals over time from whom I learned a great deal and trusted their advice. But, my list of role models is longer. I would not trade what I learned from watching and listening to my role models.

Peaches and Verna both crossed paths with me in my early years as an executive director of the East Texas Crisis Center – Peaches, an avid supporter of the Ladies Golf Association fundraiser for center services and Verna, a board volunteer who eventually became our board chair.

Both crossed paths again as the years wore on – Verna, after I arrived at United Way of Tyler Smith County – a committed fundraiser for all the member agencies, and even later during strategy work I did with the Tyler Museum of Art. Peaches, later again after she and her husband Louis established a family foundation.

Our crisscrossed paths provided countless opportunities for me to learn. They are models of great philanthropy, the kind that works at it all the time.

Collectively the two modeled many things for me to ponder.

I could go on, but I’d like to challenge you to think about your philanthropy role models.

Role models set the ideal before us. Their example is like mulch in the garden; it reduces weeds and the impact of poor decisions and provides much-needed enrichment. We learn from their example, we mirror their behaviors in our actions.

What would Verna and Peaches say about being my role models? Verna would probably tell me that Peaches far surpassed her in financial giving, and then Peaches would say that Verna ran circles around her in giving of her time and wisdom – what I have learned from each matter to me. It makes me a better philanthropist.

We lost Peaches in December, but the memories will remain with me. And Verna is still going strong even as she approaches her nineties. So, my role models are still with me.

And just one more thing for you to ponder. What kind of philanthropy role model are you? You may not know who is watching you, but I assure you there is someone — child, grandchild, friend, distant admirer. It might even be me.

Know yourself; know what you are learning from others. We’ll all be better at philanthropy thanks to our role models.