How the Goldilocks Rule Makes Your Giving “Just Right” 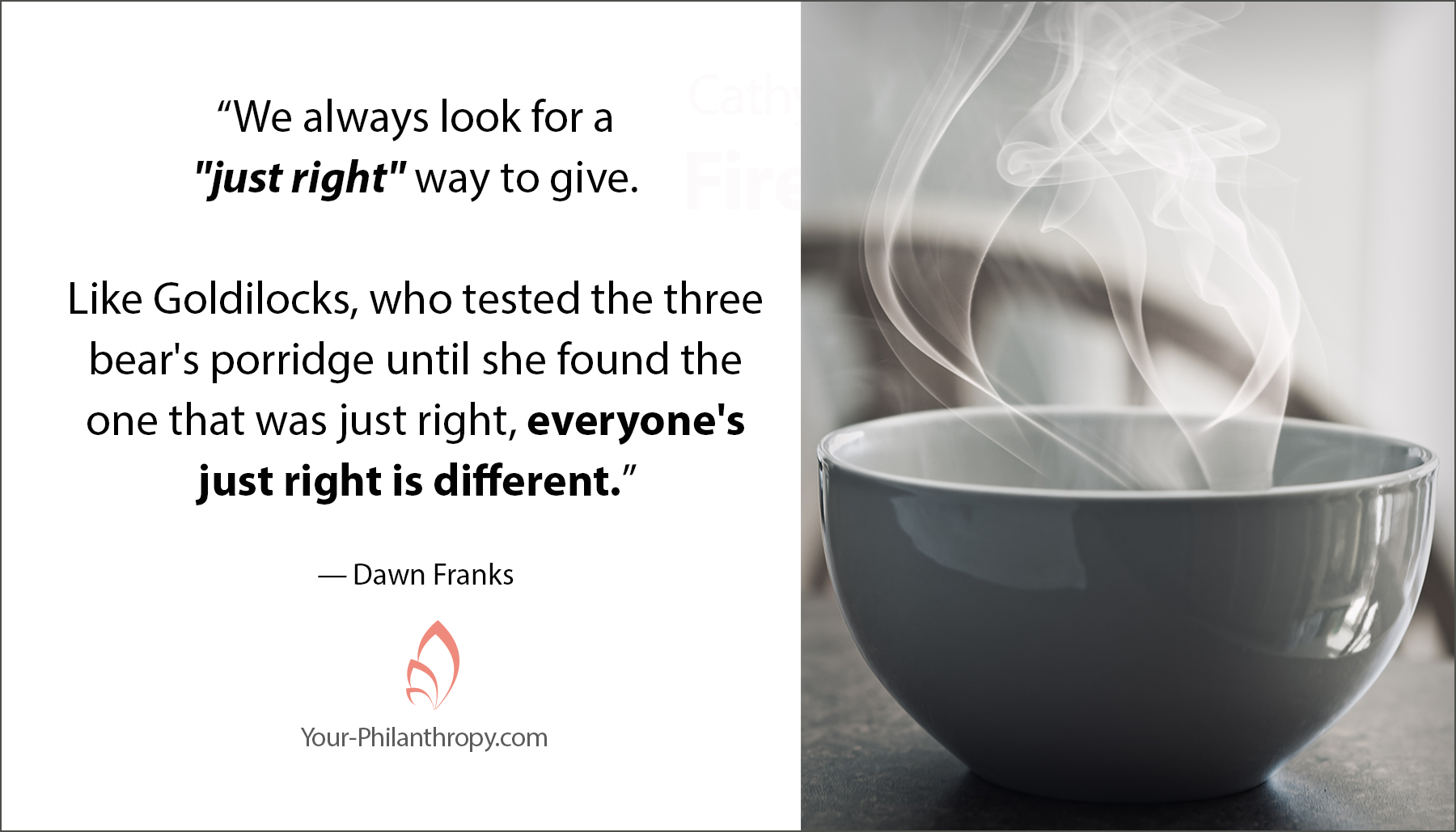 Because each of us has a personal giving signature, what I call Giving Fingerprints, we are attracted to different causes, organizations and ways of giving. The fairy tale character, Goldilocks, reminds me of how donors make decisions about giving.

In the classic tale, Goldilocks and the Three Bears, Goldilocks is an apparent rule-breaker with no respect for the effect of her actions on others. She enters the bear’s home uninvited, eats a little bit of each bear’s porridge, tries out their chairs, breaks the smallest chair, and eventually falls asleep in baby bear’s bed. The friendly bears, who went out for a walk waiting for their porridge to cool down, left their door unlocked and arrive home to discover someone has been in their home.

Like Goldilocks who falls asleep in the just right bed, some of us are relieved when we find the perfect organization or the perfect giving style. We learn through trial and error what feels just right.

Donors learn in different ways and at different rates. We always look for a “just right” way to give. Like Goldilocks, who tested the three bear’s porridge until she found the one that was just right, everyone’s just right is different.

The English writer and poet Robert Southey published the Goldilocks story in 1837, “The Story of the Three Bears.” George Nicol edited the story as verse, illustrated and republished it in 1848.

Since that time Goldilocks worked her way into our lexicon becoming a common explanation in human growth and development. It seems we’re all looking for the “just right spot” for manageable difficulty. From infancy on we test and experiment as we learn and grow.

The Goldilocks Rule states that humans experience peak motivation when working on tasks that are right on the edge of their current abilities. Not too hard. Not too easy. Just right.

Getting to the just right style happens in different ways for all of us. Some donors react to galvanizing pictures and stories that leave them inspired, angry or both. Others need information, facts and compelling economic reasons to give.

That brings me to Dr. Ray Perryman, a highly regarded economist of more than 40 years experience actively engaged in economic analysis with the Perryman Group. Last week, Perryman’s column was especially interesting. Like any economist, his reports include numbers of all kinds, from dollar figures to statistics and percentages.

In the column “Compassion: An Economic Perspective” he surprised me by providing strong connections between giving and our economy.

Early in the column, Perryman says, “Millions have slipped into poverty, are now food insecure or face housing challenges, or are experiencing mental health issues.” He explains that economic consequences will be profound and shares what he describes as incontrovertible empirical evidence.

For most of us, just right giving is easiest through the lens of helping meet a need without much thought about the origin of the need itself or its long-term impact. Perryman provides a window into the economics of giving, touching on origin and impact.

Perryman is clear about the long-term effects of poverty and food insecurity as it multiplies through business and society – $436.4 billion in gross product losses and 4.7 million job-years of employment are staggering. In Texas, Perryman predicts the losses are $48.5 billion in output. Eradicating food insecurity and addressing the effects of poverty can have a staggering impact for all of us.

He tells us that every $1 invested in food for the hungry benefits the economy by $33.00. If you give $100 to the local food bank or a community food pantry, you’ve had a $3,300 economic impact on the community. That’s a significant bonus beyond feeding hungry children, seniors, or families.

For some donors, this is too much information. For others, this is precisely the motivation they are looking for to make their giving “just right.”  If you’re one of those donors, be sure to check out the entire Perryman column “Compassion: An Economic Perspective” online at www.PerrymanGroup.com.

What kind of information motivates your giving?