How Helping Someone Is Another Way of Giving 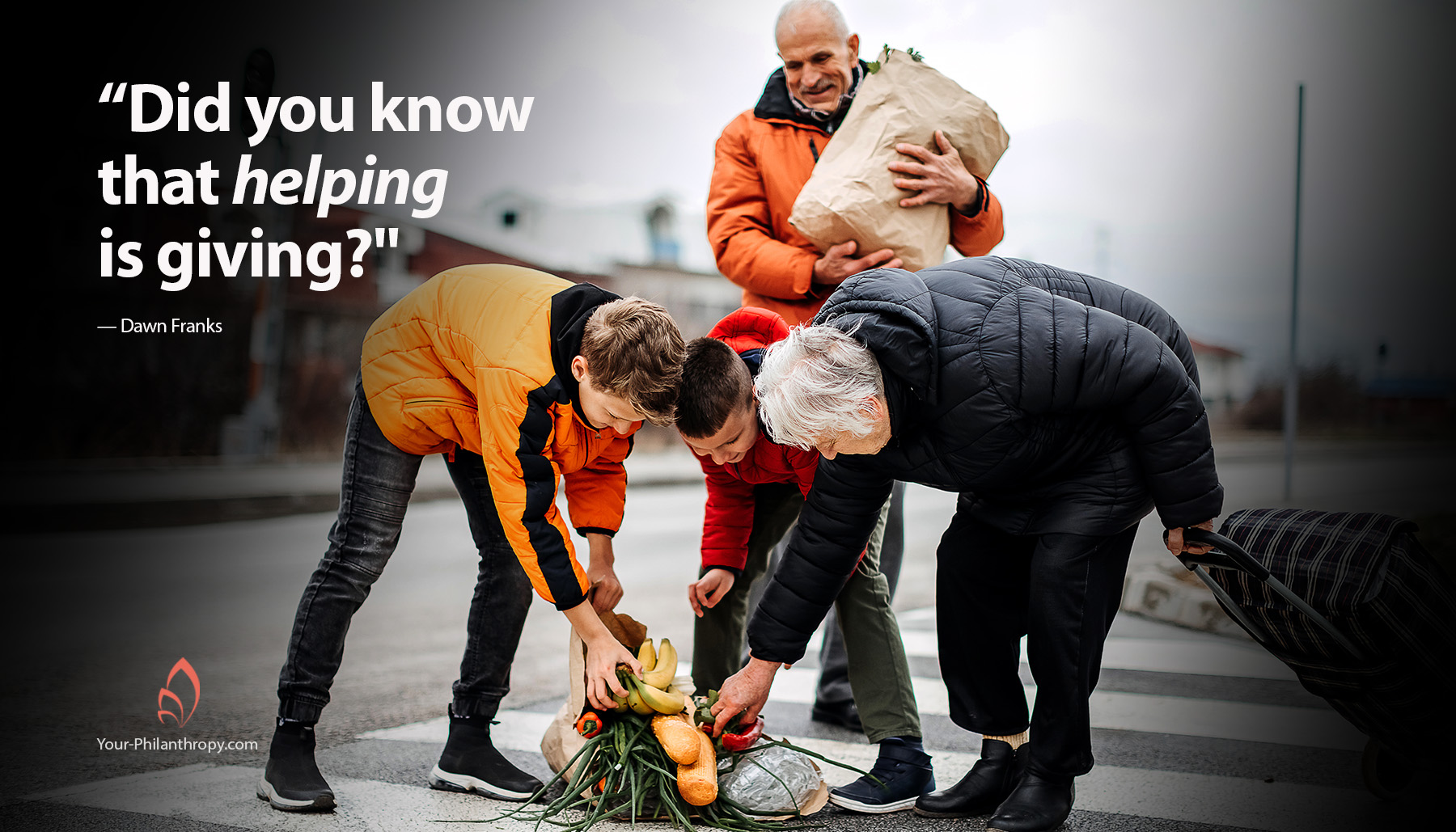 Have you helped a stranger today? Helping a stranger is immediate warm glow generosity. You feel it all over when you’ve helped simply because you could.

Did you know that helping is giving?

According to the World Giving Index 58% of Americans helped someone they did not know in 2020.

Considered one of the most generous countries in the world by the World Giving Index (WGI), America plunged from an all-time high ranking of number two in 2016 to number nineteen in 2020. Who could blame us for this surprise loss of status, after all we were in lockdown in 2020 and have been trying to recover ever since.

According to Charities Aid Foundation Chief Executive Neil Heslop, “these changes are not a sign that people’s willingness to donate decreased, but that their opportunity to donate diminished, largely as a result of pandemic-related lockdowns. Charity-based retail stores were forced to close, fundraising events were canceled, and many elderly charity volunteers had to shelter themselves instead of volunteering.”

Who Ranked Number One?

The June 2021 report looks at what happened during the first year of the pandemic. The top ten giving countries were Indonesia, Kenya, Nigeria, Myanmar, Australia, Ghana, New Zealand, Uganda, Kosovo, and Thailand.

As Heslop said, the 2020 numbers are more about opportunity and less about generosity. With large swaths of America shut down in 2020 we either couldn’t leave our homes or the places where we give and volunteer were closed and doing very little fundraising. Even so, we found ways to give, often simply helping a stranger.

Of the three different behaviors, more than three billion people (55% of the world’s adults) helped a stranger in 2020. Plus, 31% of surveyed adults donated, the highest number to have done so in the last five years. Volunteering was basically unchanged at the global level.

No Magic Bullets, But Many Pockets

According to the World Giving Index Tenth Edition in 2019 there is no “magic bullet answer to tell us ‘what makes a country generous?’ There is no one trait that points to a country’s generosity. Top performing countries represent a wide range of geographies, religions, cultures and levels of wealth – what they all have in common is simply an inspiring willingness to give.”

What’s in Your Pocket?

Today pockets can be deep, shallow, front, back, down the legs, inside and outside. You might have one or two or seven. What’s in your pockets?

I like to think of our willingness to give as coming from so many different pockets. Not just our wallets, but quite literally pockets of generosity we each carry around every day.

They carry what we care about, cash, change, credit cards, keys, faubs and cell phones. Pockets are hiding spots for nervous hands, little boy’s rocks and Littlest Pet Shop pets. I know this because my brother carried rocks in his pockets as a child, and my granddaughter carried Littlest Pet Shop toys.

The oldest known pocket was really a pouch tied around the waist of a man, nicknamed the Iceman, discovered in 1991, perfectly preserved in glacial ice for 5,300 years. His perfectly preserved pocket held a scraper, drill, flint flake, bone awl and a dried fungus.

Like all the different pockets in your pants, you give in many different ways when you make charitable donations. For example, you might write checks from your checking account, charge a donation to your credit card, give from a donor-advised fund, or include an organization in your will. You might volunteer every week, or at a special event. Or maybe you helped a stranger.

WGI results show us that generosity is much more than a result of being wealthy. We can all give in some way from one of our pockets. Unlike the Iceman, most of us do not intend to preserve what’s in our pockets. Instead, we frequently use what’s in them for the good of others. Soon, the Gallup folks will be calling one thousand people in America to answer three questions about their giving in 2021.

If you get the call what will your answer be?

Now if we could also find someone as iconic as Jennifer Garner, Samuel Jackson, Taylor Swift, or John Travolta as Santa Claus to help stick the question. “What’s in your pockets?”