Why the Giving Triangle Matters 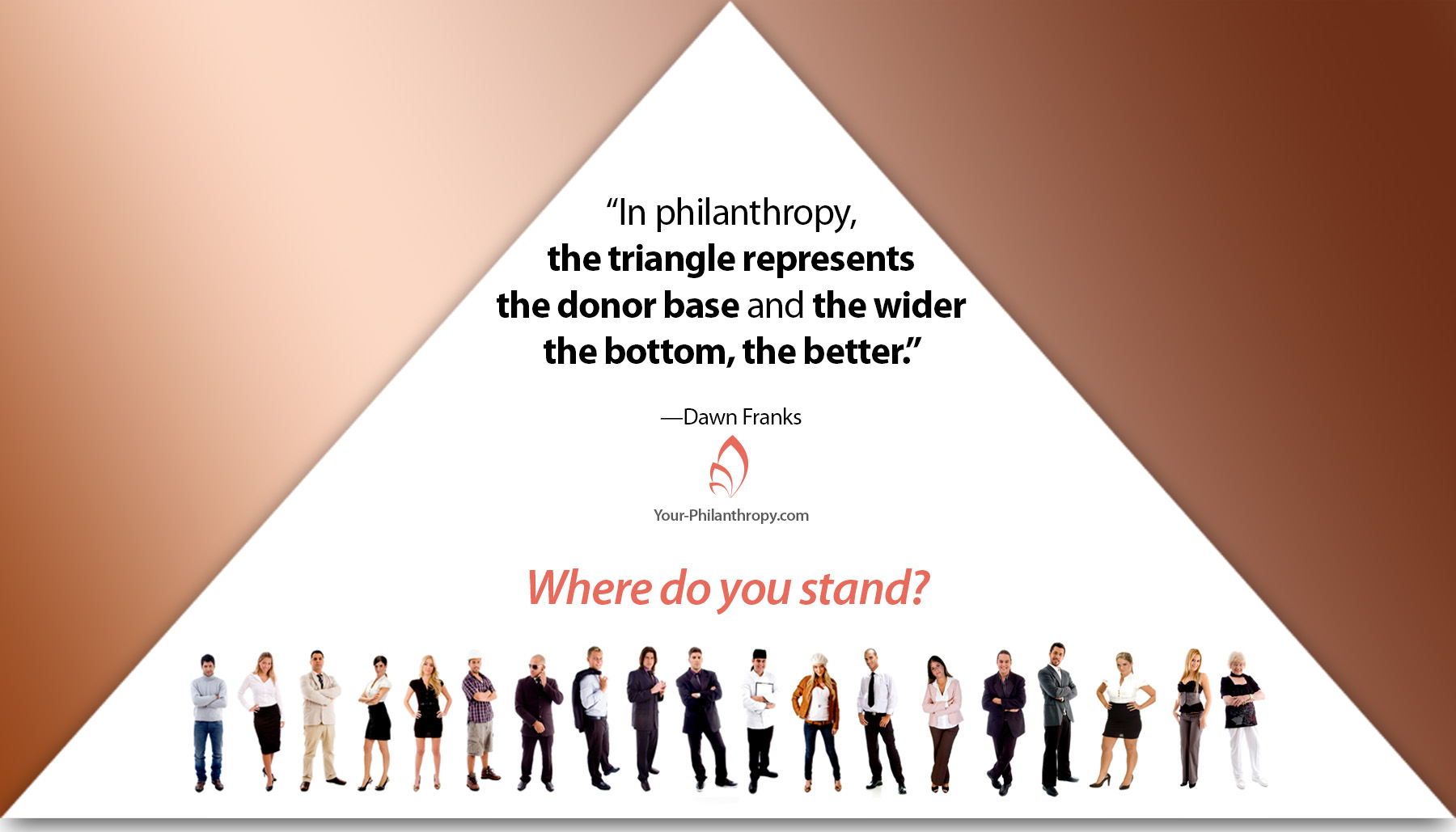 I didn’t think much of triangles in the tenth grade. They were just sides and angles. They were consistent, always a base with two sides leaning against each other as they came to a point.  Sides might be equal, or not.  The space inside the triangle is larger at the bottom than the top. Triangles have a tough time balancing on their points. That’s what I learned in math… and then came philanthropy.

Obviously, if a row of individuals stands on the bottom of the triangle and another row stands on their shoulders, each row would include fewer people than the one below.

Where do you stand?

If you write a check to even one nonprofit organization, you are in the triangle. Where are you standing? If you are one of their many small donors, you are likely on the bottom row.  Did you imagine your row would be the most important? Did you know the organization needs many, many donors on the bottom row?

In philanthropy, the triangle represents the donor base and the wider the bottom, the better.

I would need more fingers and toes to count the number of times I’ve explained to a nonprofit organization how important it is to widen their base of donors. Young organizations often get their start in life with only a handful of donors who share the passion for a cause or the vision of the founder. Their view of the philanthropy world is limited and often lacks an understanding of this fundamental geometry principle.  The row at the bottom, carrying the weight, consists of many individuals.

Reasons for Growing a Wide Base of Support

Sounds simple, but there is a hitch.

Recent reports about charitable giving indicate donors are retreating from previous levels of giving.  Some of us are giving less, and some are retiring altogether.

In The Chronicle of Philanthropy’s, How America Gives we gain insight into the giving habits of taxpayers, specifically itemizers.  Bottom-line: only 24 percent of Americans made charitable deductions in 2015, down from 31 percent ten years ago.

In a recent article from The Chronicle, we also learn about estimates that 59 percent of us gave to charity in 2012, this coming from a study by Indiana University’s Lilly Family School of Philanthropy.  Bottom-line: 41 percent of us didn’t give to charity.

The years reported are different and the numbers don’t add up. It is undoubtedly related to many minute details in the methodology of the research. Let’s forget about the details for a few minutes.

My questions are how do we as donors react to knowing this information? Do we react at all or even care about it?

Likely not, because when writing our donation check from a personal bank account it’s about the bank balance and any planning done ahead of writing the check.

My point is complicated enough, and then an economist, Jonathan Meer of Texas A&M got in the mix. He reports that not only did giving fall off during the Great Recession of 2008, but it had not recovered by 2012. By all estimations, it has still not.

Meer suggests our giving habits are changing, perhaps related to millennials, and then later-life income shocks like many experienced during the Great Recession, leads us to a place of fewer individuals on the bottom row. We not only are giving differently, but we are also afraid to give.

I’ve already mentioned that triangles don’t stand well on their points. The organizations we care about want us in the triangle. You didn’t need to make an A in geometry to understand the principle of a broad base. Nonprofit organizations are depending on all of us, especially those of us on the bottom row. Where did you say you were standing?