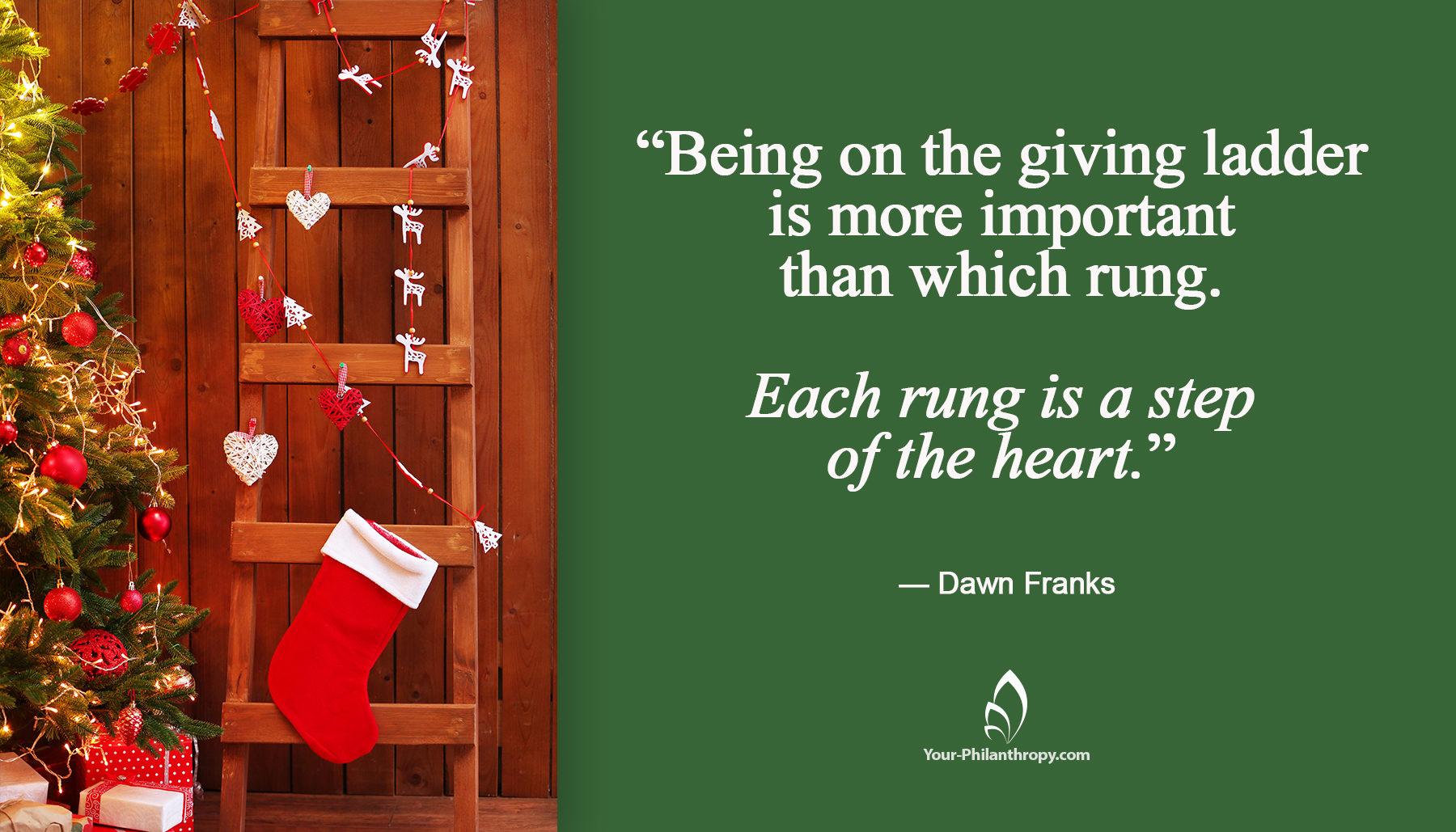 Peeping through a keyhole on Christmas morning I could see the packages and toys Santa brought. All under the age of ten, we four made up the grandkid clan taking turns looking through that keyhole while my grandmother took her sweet time cooking breakfast.

My sweet grandmother had a six-year-old granddaughter with a “can’t you hurry it up” attitude, anxious to get to the new Raggedy Ann perched up high on top of many other gifts from Santa and family. I remember thinking I might need a ladder to reach her. Chatty Cathy wasn’t quite as high up, but I thought there might still be a need for a ladder.

Ladders do come in handy this time of year. Here’s a quick look at the “Eight Rungs of the Giving Ladder” from the twelfth-century Jewish scholar and physician Maimonides.

Where Are You on the 8 Rungs of the Ladder?

Bottom Step:  Those of us who give grudgingly, perhaps out of obligation.

Seventh Step:  Those of us who give less than we should, but we do it cheerfully.

Sixth Step:  We give directly to someone in need when asked.

Fifth Step:  We give directly to someone in need before anything is asked of us.

Fourth Step:  The recipient of our gift is aware we’re the donor, but we don’t know who the recipient is. Example – we give to a particular cause, the recipients learn who the donors are, but we never know who received our donation.

Third Step from the Top:  We know the recipients, but they don’t know us, one version of an anonymous gift.

Almost to the Top:  Neither the recipient nor we know each other, another kind of anonymous gift.

Top Rung:  The highest level of giving money, a loan, your time or whatever else it takes to enable an individual to be self-reliant. We give with a cheerful heart, allowing the recipient their dignity.

Being on the giving ladder is more important than which rung. Each rung is a step of the heart.

The Ninth Rung on My Ladder

I would have added one for the teachers among us who make time to model giving for children and grandchildren. On this rung, next generations would learn about our giving, perhaps share in giving experiences and take lessons learned forward for future generations.

A Family Exercise in Shared Giving

Make it fun, and repeat next year. That creates traditions that become stories. Stories are the sticky stuff – the glue – that sticks one generation to the next.

If your family is far away, invite friends to share in a giving experience.

Start a giving tradition you can repeat every year. Start with whatever family and friends are around and just keep repeating.