Give the American Way 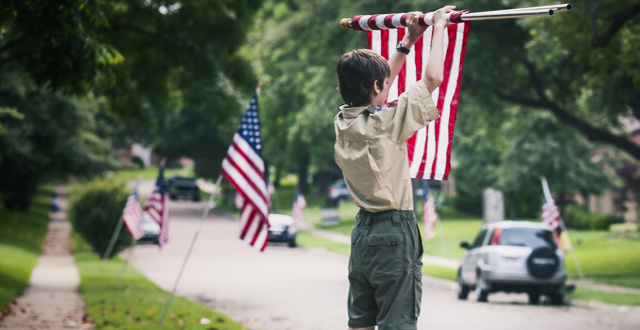 She waves proudly in the wind. As I drive down neighborhood streets evidence of our patriotism is most on exhibit between June 14 and July 4. Our Flag stands proudly in front yards next to mailboxes and flies from porches, street after street.

As a young teen living on an air base in Wiesbaden, Germany I watched German families stream on to the base for Armed Forces Day. American patriotism flew high on that day, too. In the spirit of America long lines formed as families awaited their turn for free American ice cream.

On Armed Forces Day there was baseball and fireworks at dusk, but the ice-cream was what they came for. If you asked them to describe Americans it would have been through that lens.

Recently I read a Huffington Post interview of a Consular Officer working in the Spanish Consulate in New York City, José V Fernández. As a 16-year-old exchange student he first arrived in Oklahoma from Spain in August 2001. He had what he self-describes as “a fairly cynical expectation of what it meant to be an American.” Within weeks he witnessed firsthand the meaning of American patriotism, realizing what he and his friends had seen in Hollywood movies did not begin to describe the depths of our patriotism.

He was surprised to see that America’s devotion to service was “far more than just herd behavior – the way it was portrayed in his country of Spain.” I his words “loyalty and service was not hollow; it was not a desire to belong, rather a reasoned dedication to a cause greater than themselves.”

One way we show devotion is through our philanthropy and volunteer spirit. We are passionate about our country and the many facets that make her what she is. We regularly contribute to causes that are greater than ourselves with our money and our time. We hold high the value of individual choice and with that come the right to support the causes we believe in.

We are a country founded on individual liberties, rights and freedoms, yet we stand unified as one. That is the American paradox. It is what confused Fernandez when he first arrived here and it is part of why we are not well understood by other cultures and countries.

Part of what makes our philanthropy and volunteer spirit different than anywhere else in the world is the freedom to choose where we give, when we give and how much. It is a right of all citizens regardless of economic power.

It is the widow’s mite and the billionaire’s check.

So, whatever organizations you support, whatever amount you choose to give  or time you volunteer remember this freedom is based on the fundamental right to make a difference in the way that best represents our own passions while standing together to create this country we call the United States of America.

Before you fire off the fireworks remember to celebrate Independence Day by giving to something you are passionate about.  That’s our American Way.

Is there an organization you would like to give to but you want to know more about them first?  Contact me and we’ll talk about it.