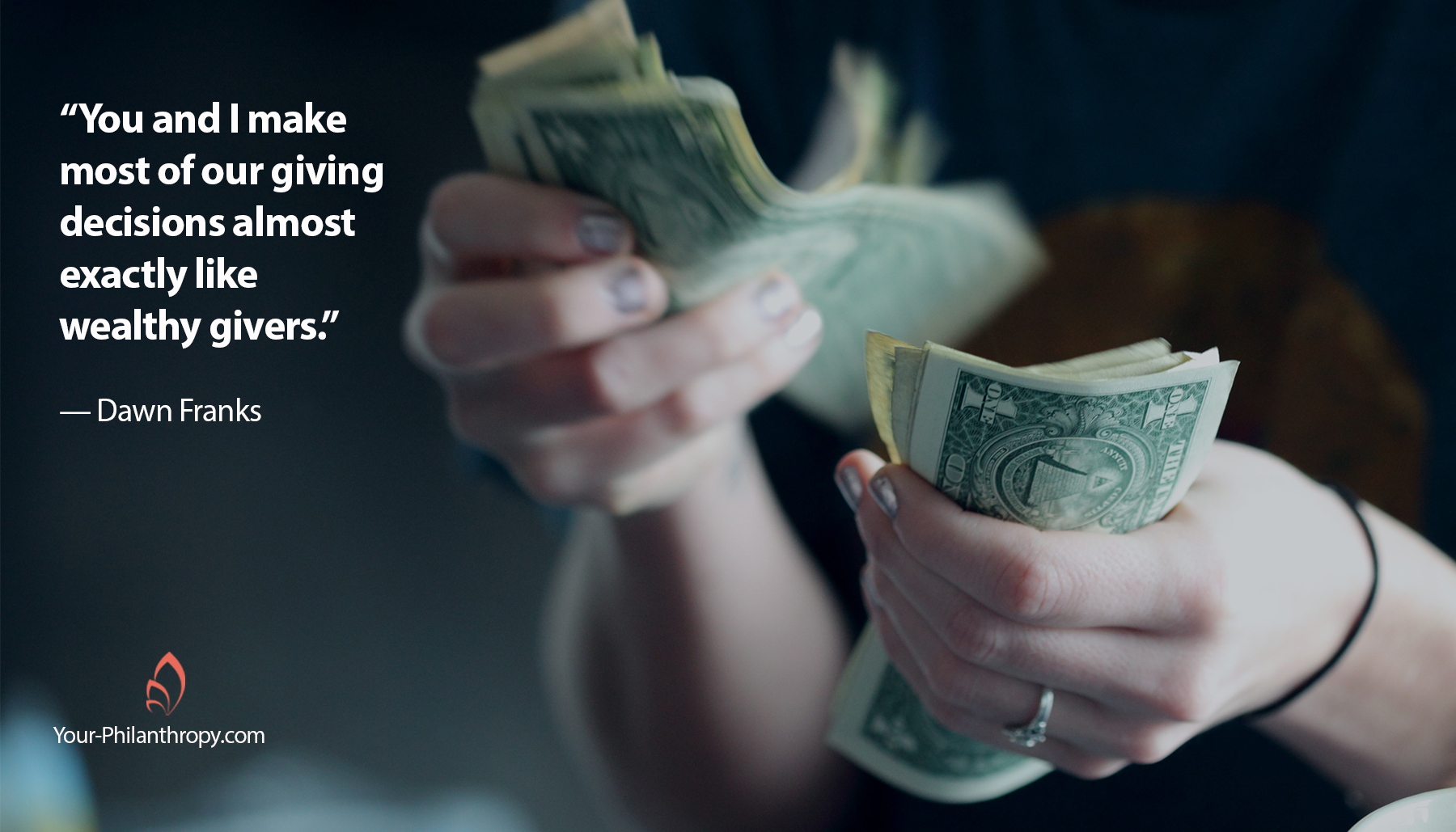 Are you familiar with the idiom, “he puts his pants on one leg at a time,” often followed by “just like everyone else.”

Well, that’s what I thought about as I read an article detailing a study of the wealthiest donors and how they make giving decisions. The study results were released in late 2017 by The Philanthropy Workshop (TPW), known to many as a leader in philanthropy education and donor networking.

My big takeaway was just how similar the “average” donor is to those who give at the highest levels.

A group of high-wealth donors is as diverse as you can imagine. Younger to older, large to small gifts, more or less time researching before they give, and even the causes they favor. They are, to use another phrase, all over the place. And just like us.

As I continued reading the article (Inside the Minds of Wealthy Donors), I realized how similar we are to the mega-donors we read about, follow on social media and watch on television news.

You and I make most of our giving decisions almost exactly like wealthy givers. The biggest difference is that the “average” donor, like you and me, give closer to 4% of our income (AGI) on average while the wealthy donor gives less than 1% of their wealth away every year.

Strictly speaking, some of these stats are apples to oranges. It’s our style of giving that looks more like an orchard of apples or oranges, whichever you like best.

Let’s compare the TPW Study of High-Wealth Donors to you and me.

According to the article, “Roughly a third of all charitable gifts made in the U.S., totaling $390 billion last year (2016), come from the top 1 percent” of donors and as it went on to say, they give less than .05% of their wealth away each year.

According to National Center for Charitable Statistics, those of us with adjusted gross incomes around $100,000 are giving just under 4% of our income away each year. According to the article, “Roughly a third of all charitable gifts made in the U.S., totaling $390 billion last year (2016), come from the top 1 percent” of donors and as it went on to say, they give less than .05% of their wealth away each year.

There’s a big difference. As a percentage, we give more away than the donors with high-wealth.

What I recognized after reading the TPW study report is how similar donors are in how we approach the work of giving in very similar ways, and we mostly avoid the hardest part of the work in the same way.

The giving season is upon us, and fundraising requests are stacking up. Take heart, we’re all still putting our pants on one leg at a time.

If you want to feel different about your giving this year, check out Giving Fingerprints before you dive into your stack of letters. It’s one way to bring “Joy to the World” and into your own heart.

Do you have questions about your personal style of giving? Let’s talk about it, or start a conversation here with friends. After all, we give like you.