6 Tips to Engage the Next Generation in Giving 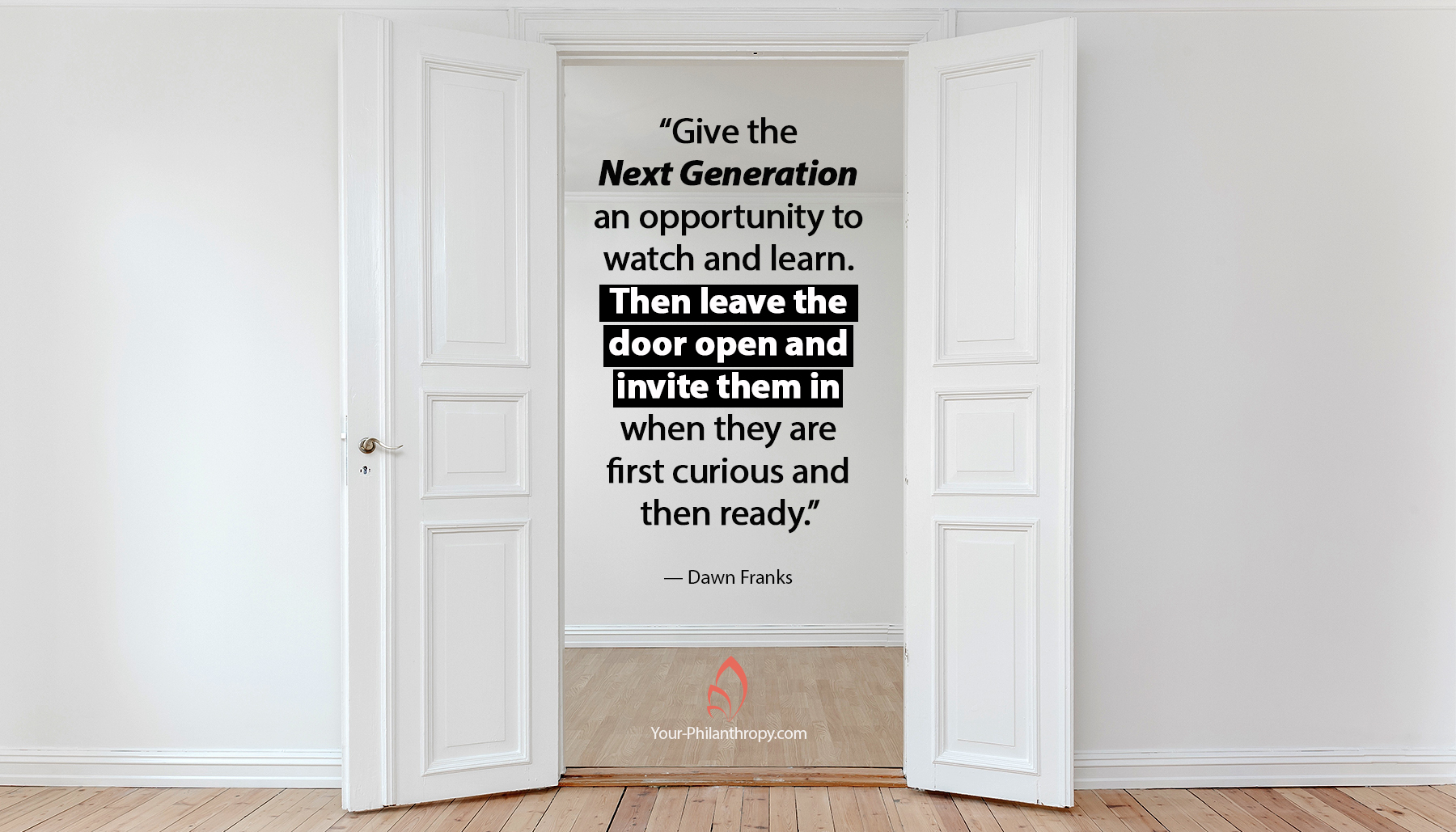 My recent trip to the sunshine state was missing the yellow stuff as I drove in the blinding rain up the coast of Florida from St. Augustine to Jacksonville. Driving a rental car, listening to directions from my tablet, and not being able to see more than the lights in front of me was unsettling.

I missed a hairpin exit where the sign said to slow to 25 miles. I did see the exit; but while processing what kind of curve it was I simply drove right by it, forcing me onto an alternate route. Two miles later, the rain had slowed, and the new route was better. Less traffic and better visibility.

The drive from St. Augustine to the airport followed a weekend of working with three generations of one family gathered for an annual meeting to make giving decisions. The entire family includes one remaining member of the first generation, six siblings, and sixteen grandchildren. Barely thirty percent of the living family tree had gathered this weekend, grandmother, two siblings with spouses, and three grandchildren.

Of the three grandchildren who joined us, one had attended previous meetings. Two were curious, hoping to learn how the family worked together in this venture called a family foundation.

The first generation was proud to see grandchildren interested, but the second generation was wrestling with how to include the third generation, and equally important, what impact that would have on future giving decisions.

Family foundations are legally organized entities with specific rules, requirements, and obligations, with a board of directors, commonly made up of family members and most often established in perpetuity. Thus, the eventual challenge of when and how to involve the next generation.

Families don’t have to create legal entities to share the experience of giving together. They can use a donor-advised fund at a community foundation or simply a family member’s checkbook.

How to give together should be determined by what works best for your family, taking long-term intentions into account.

Let’s get back to those sixteen grandchildren. Remember I said the family had six siblings? Those sixteen grandchildren represent the complex extension of one family culture intertwined with spouses to create six new micro-families. Diverging opinions, choices, and decisions quickly complicate what we call family when we are asking various members to think, work and decide together.

In this family, like any other, not every sibling wants to join in the work for various reasons. But what about that next generation? Can a family skip over any uninvolved second-generation members and directly engage grandchildren from across the spreading branches? Absolutely.

At this point, the answer may look like the exit I missed in the blinding rain. The good news is there are alternate routes to get where you are heading.

Six Tips to Engage the Next Generation in Giving

Take time to work through these ideas intentionally. If you feel they will be a good addition to your group, then invite them to serve for a year. Make a point to have a conversation at the end of the year to help them assess the first-year experience and decide whether to continue the commitment.

You can do this based on the order of next generation ages or simply wait to see who shows interest. You can do it one at a time, several or all. There isn’t a right or wrong way.

Bottom line: Give the Next Generation an opportunity to watch and learn. Then leave the door open and invite them in when they are first curious and then ready.