Ask a Fellow Donor About Their Giving Experiences 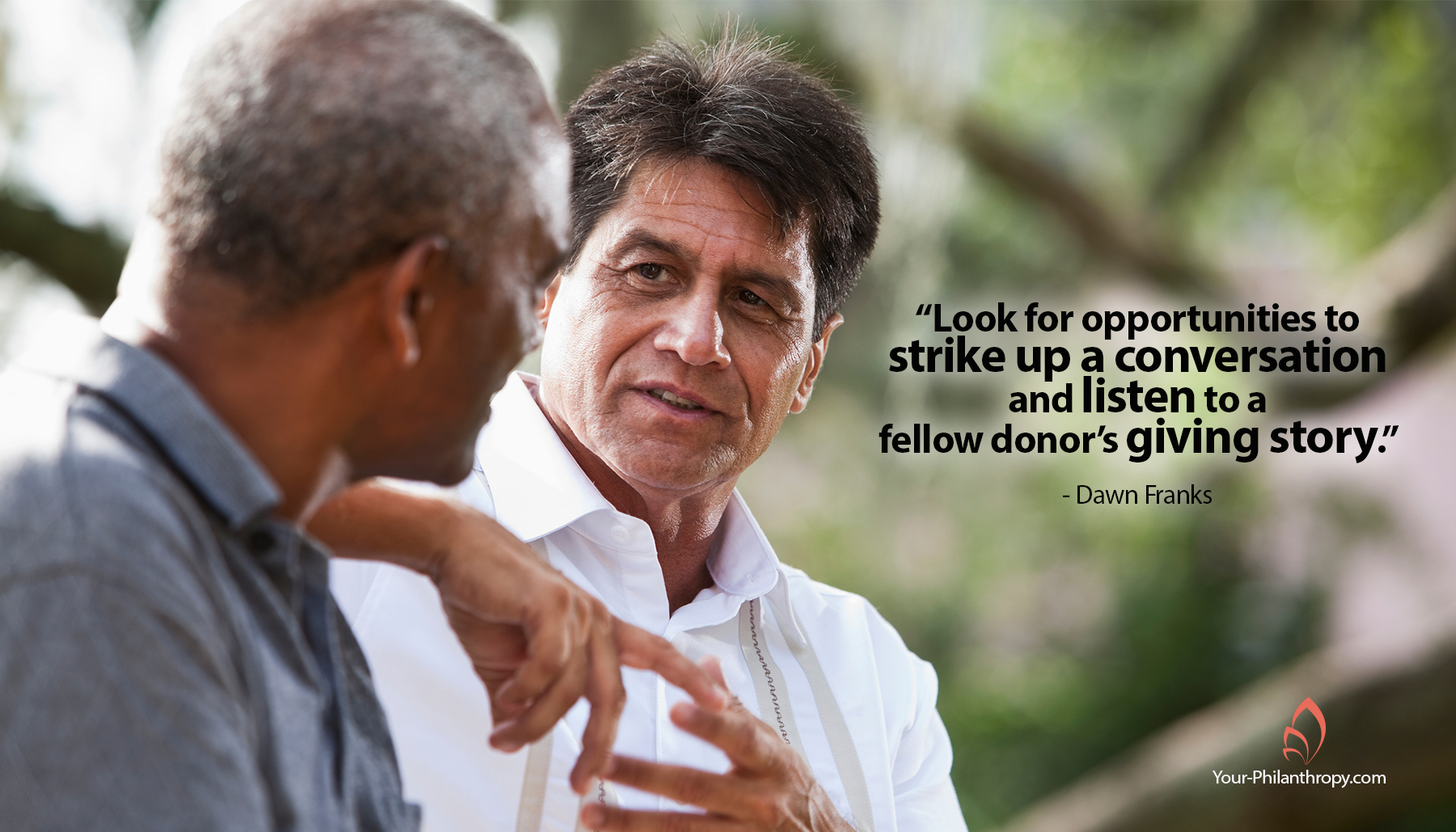 A thread of embarrassment runs through donor stories. So much so that donors seldom share their giving experiences. For some it’s about too little to give, others too much too late. Other stories hint at long-held family beliefs that it is shameful to talk about giving, wrong to boast.

One day a woman sat in my office and discussed an expected sizeable gift that a terminally ill friend with no living family was leaving to her, trusting she would do something significant and impactful with the gift. She had no role models for giving at this level and didn’t know where to turn for direction. She was embarrassed and didn’t want any family members to know of her predicament.

On a different day, a gentleman sought me out at a fundraiser event to let me know he and his wife needed to talk with someone about several giving decisions. What was remarkable about that short conversation was how smoothly he went from a normal tone speaking with a friend to a hushed voice I could barely hear as he caught my attention while passing by.

Talking about giving is uncomfortable for donors and yet a subject of frequent discussion among nonprofit executives and fundraisers. They make a study of the topic. They attend conferences on the subject and read about it all the time.

The donor should be an expert on giving, yet knows less about it than the nonprofits in search of donors. It’s akin to hunters knowing more about lion behavior than lions know themselves. Something is wrong with this picture.

From the outside looking in the donor looks humble and modest about their giving. On the inside the donor feels self-conscious about their questions, confused with the answers, more puzzled, and not at all informed.

In college, I had a professor who had transitioned from the real world of law enforcement to attaining a Ph.D. and going on to teach at several universities. His class was interesting in a real world sense. By the end of the semester we felt better prepared for what lay ahead in our own real world.

He had done both, become an experienced law enforcement officer and then studied it to understand how to be an even better officer.

He shared many experiences from ten years of mistakes and lessons.

Follow his model and donors can ward off the embarrassment. They become a better donor and get excited about opportunities to make a difference.

Talking about philanthropy with another donor should not be invasive. How much they give isn’t important. Learning about their why and how is important. It’s an opportunity to let someone share with you what they are passionate about. That’s not embarrassing; it’s gratifying.

Here is a starting place to get the conversation going.

In her words donors become “philanthropic leaders, when open and articulate about why they give, have the positive power to influence others in ‘the crowd’ to follow suit, becoming, in essence, an ambassador for philanthropy.”

Watch organization newsletters for donor lists and note those from whom you would like to learn. Look for opportunities to strike up a conversation and listen to their giving stories. Listen for why and how and you too will become a philanthropy ambassador.