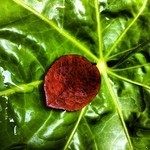 The Velvet Revolution, or Gentle Revolution, was a non-violent, student-led revolution in Czechoslovakia that took place from November 17 to December 29, 1989. Dominated by student and other popular demonstrations against the one-party government of the Communist Party of Czechoslovakia, it led to the collapse of the party’s control of the country, and the subsequent conversion from Czech socialism to parliamentary republic.

As well, it vaulted Vaclev Havel, an essayist and playwright, to fame. Twenty-one years later, the Arab Spring was precipitated by students taking part in mostly non-violent protests. In both cases, it was young people taking the lead.

Today, I heard something that surprised me. It was not a revolution, but it was like seeing the first red leaf drop from a tree in the fall. It was not a young person but someone in their 70s – someone I have known for many years to be a conservative evangelical supporting the causes you might expect.

Now, she did not raise her fist or lay down hoping to be carried away by the police but what she said took a little air out of the room. “I love National Public Radio, and I support it and think we should all support it. It is a glimpse into the world in which we live.”

I don’t think she was laying down her life for Big Bird. I think she was saying something indicative of a feeling that is building.

In the past I have heard it said that Christians should support only Christian causes because there are plenty of pagans to support the arts, museums, planetariums and NPR, but only Christians will support evangelism. But what happens to our culture if Christians withdraw their funding from these secular institutions? They would disappear completely because those institutions are not mainly supported by non-Christian foundations and donors but by thousands of Christians who care about their communities.

I think we all know that the younger generation believes supporting these things is legitimate but when those of us who are older and come from the mainline evangelical community say it as well then there has been some kind of a very, very quiet change of season.